Known as a 'functional fingerprint', it could help identify people, and also unlock the mystery of diseases such as ADHD and autism. Pictured, a 'brain map' image similar to those used in the study.

Forget passwords, 'brainprints' could be used to identify exactly who you are

Humans have a unique 'brainprint' that doesn't change throughout our life, researchers have found.

Known as a 'functional fingerprint', it could help identify people, and can even tell if people are related - and distinguish between twins.

It could also unlock the mystery of diseases such as ADHD and autism.

Known as a 'functional fingerprint', it could help identify people, and also unlock the mystery of diseases such as ADHD and autism. Pictured, a 'brain map' image similar to those used in the study.

'Similar to DNA, specific brain systems and connectivity patterns are passed down from adults to their children,' said Damien Fair of the Oregon Health & Science University following a 2017 study.

'This is significant because it may help us to better characterize aspects of altered brain activity, development or disease.'

Using two data sets of functional MRI brain scans from more than 350 adult and child siblings during resting state, Fair and colleagues applied an innovative technique to characterize functional connectivity and machine learning to successfully identify siblings based on their connectotype.

In a more recent study, they found just 30 percent of the connectome is unique to the individual.

Through a similar process, the team also distinguished individual sibling and twin pairs from unrelated pairs in both children and adults.

'This confirms that while unique to each individual, some aspects of the family connectome are inherited and maintained throughout development and may be useful as early biomarkers of mental or neurological conditions,' said lead author Oscar Miranda-Dominguez, Ph.D., research assistant professor of behavioral neuroscience, OHSU School of Medicine.

'I could take a fingerprint from my five-year-old, and I'd still be able to know that fingerprint is hers when she's 25,' associate professor Damien Fair told Quanta.

'Even though her finger might get bigger and go through other changes with age and experience, 'still the core features are all there.'

Identifying, tracking and modeling the functional connectome could reveal why some people have a higher risk of developing certain neuropsychiatric conditions. 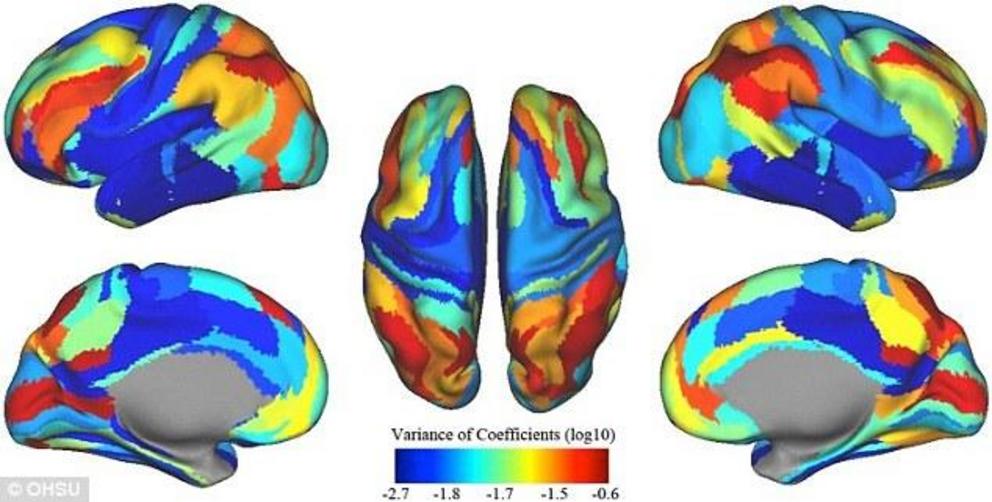 A 2014 analysis by Damien Fair and his colleagues found 30 percent of the connections, mostly in areas linked to greater cognitive processing, were unique to individuals.

'These findings add to the way we think about normal and altered brain function,' said Fair.

'Further, it creates more opportunity for personalized and targeted treatment approaches for conditions such as ADHD or autism.'

HOW BRAIN MAPS CAN FIGHT ADHD AND AUTISM Overall, the researchers hope they will soon be able to create a dynamic map of brain connectivity from 20 to 44 weeks post-conception, which will link together imaging, clinical, behavioural, and genetic information

The goal of the project is to create a dynamic map of human brain connectivity from 20 to 44 weeks post-conceptional age, which will link together imaging, clinical, behavioural, and genetic information.

The images and data will be available for wider use by the scientific community.

The researchers hope this will help to improve understanding of conditions including Autistic Spectrum Disorder and Cerebral Palsy.

A separate study led by Carnegie Mellon University and funded by the US Army measured the local connectomes of 699 brains from five data sets.

These are the point-by-point connections along all of the white matter pathways, rather than the connections between the different regions.

The researchers then used the data from the diffusion MRI and reconstructed it to calculate the distribution of water diffusion along the cerebral white matter’s fibers.

This revealed that these features act as unique ‘fingerprints’ for each person.

The team ran more than 17,000 identification tests, and found that they could determine if two local connectomes came from the same person or not nearly 100 percent of the time.

By Mark Prigg / US Science and Technology Editor