This futuristic hospital has introduced nature as medicine

Lush garden views and natural landscapes aren’t usually the first thing you envision when you think of hospitals, but Khoo Teck Puat Hospital in Singapore is changing all of that.

When it comes to reenvisioning healthcare and the mental state of those who are admitted, Khoo Teck Puat Hospital is really advancing how we care for those who have fallen ill. Whether it is due to lack of prior proper care, one’s diet & lifestyle, or a stagnancy to one’s energy creating blockages — and in turn illness — it is important that we look at this field and industry (medical/healthcare) as one of the most crucial for shifting humanity.

As MindBodyGreen reports, “In 2005, CPG Corporate, a Singapore-based design firm, was tasked with creating a hospital that actually lowered visitors’ blood pressure. ‘How do we challenge the idea of a hospital to deinstitutionalize it and make it look, smell, and feel, unlike a hospital?’ Jerry Ong Chin-Po, an architect who worked on the project, told MBG of the initial challenge. ‘We felt the best way to do it was to integrate nature into the space.’”

The hospital, which opened its doors in 2010 and now serves 800,000 residents in northern Singapore, has masked the smell of medicine and chemicals with over 700 species of fragrant native plants. In the lobby, sounds of machines are drowned out by bird species in the central courtyard. And instead of walking through sterile white hallways, patients, caretakers, and the occasional butterfly navigate the space on outdoor bridges wrapped in greenery.

In Singapore, medical buildings have multiple tiers of patient rooms (it’s part of how the country maintains its famously cheap health care). Some are private and have air conditioning; others have up to five beds and rely on natural ventilation. In order to ensure that all patients feel comfortable—regardless of how much they’re paying to be there—Chin-Po’s team again leaned on nature. They installed new windows that could be opened wider to allow for more airflow and made sure that every patient could see greenery from their bed, even if it was just a planter box on the other side of their window.

At mealtimes, patients are given organic food grown in a massive rooftop garden, and everyone fills their plates with fruits and veggies on the weekly, hospital-wide Meatless Mondays. ‘We always bring this idea of creating a total healing environment,’ Chin-Po says. ‘Not just for the patients but for the caregivers and staff as well. It’s all part of the whole system.’

This is the healing power of nature and community. 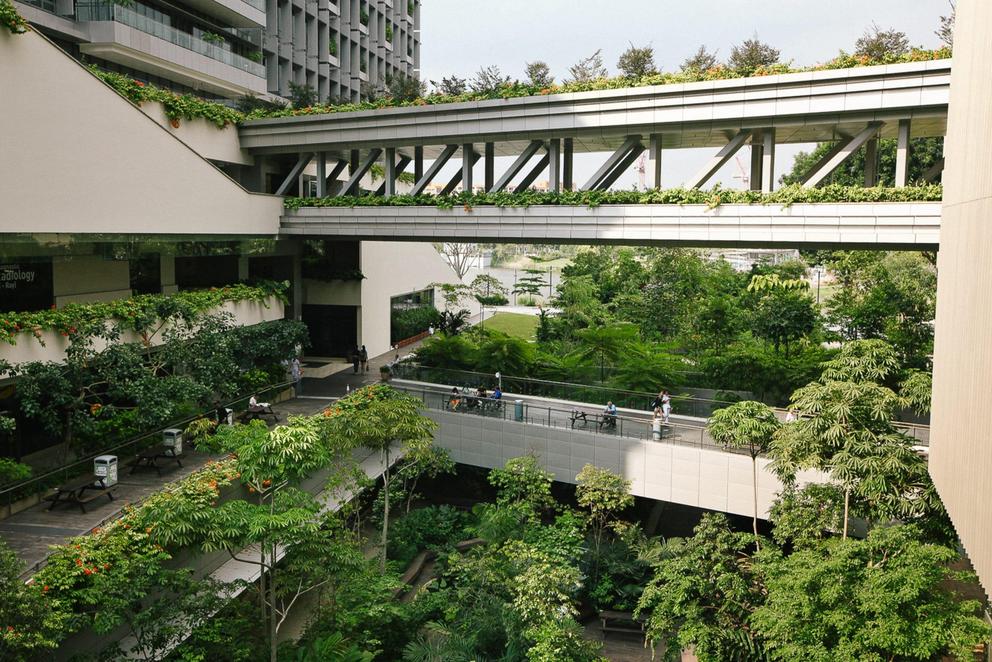 And so the next question is, with all of the greenery, community and natural light, are patients healing more rapidly at this futuristic hospital? Well, it is reported that while there is still not sufficient evidence to back this claim, Chin-Po says that anecdotally, patients seem to appreciate the hospital’s unique design and are actually willing to pay more to go there than other hospitals in the area.

And, though it’s not extensive, there is a body of research showing that greenery and natural light do aid in recovery. One 2008 study found that patients who had plants in their rooms had lower blood pressure and reported less pain, anxiety, and fatigue than patients who didn’t. Another one back from 1984 concluded that hospital rooms that had windows overlooking nature helped patients recover from surgery quicker than ones that faced brick walls. Outside of a clinical setting, spending time around nature has been shown to reduce the risk of type 2 diabetes, cardiovascular disease, and stress.

As more of those around us seem to fall ill, it is important to look at alternative ways of healing. Whether it is holistic, alternative, or simply nature itself, it is steps like this hospital is taking that are really going to create the shift we need as a collective. We are lovers of the outdoors by nature, and though our current society and system seem to have us forgetting to step outside and ground, it is key to our longevity on this planet.

From the Sun itself being our best source of vitamin D to the very oxygen we breathe being gifted to us through trees, we owe a lot to nature.

Remember, sick or not, it is in our best interest to take time out in nature to nurture both our Soul & our bodies. This hospital is just the beginning of a great remembrance back to real self care.

As an explorer and artist of written, visual and audio formats, Dulce Ruby aims to connect the connected through travel of both inner & outer worlds. She is the founder of Soultraveler.co and an international meditation guide who has hosted retreats & events for big brands like LUSH Cosmetics, British Polo Day, Alex & Ani, and more!

As an explorer and artist of written, visual and audio formats, Dulce Ruby aims to connect the connected through travel of both inner & outer worlds.