Several years ago, when conventional wisdom dictated that to push inflation higher and jump start lethargic economies central banks have to push rates so low as to make saving punitive and force consumers to go out and spend their hard earned savings, several central banks including the ECB, SNB and BOJ crossed into the monetary twilight zone by lowering overnight rates negative. Then, year after year, we would hear from the likes of Kuroda how the BOJ will continue and even extend its insane monetary policy, which now includes the purchase of 80% of all Japanese ETFs...

... until the BOJ hits its inflation target of 2%.

And yet, year after year, the BOJ would not only not hit its inflation target but appeared to drift ever lower, as did the ECB, SNB and any other bank that had gone NIRP, confounding all economists and central bankers: why was this happened if rates were negative? Why were consumers not taking their money out of the bank and spending it, pushing inflation higher?

Nobody had an answer, until in late 2015, we offered a glimpse into what was structurally flawed with this "model": using a report by Bank of America, we showed that not only had household savings rates not declined in countries with negative rates, they had in fact risen. There was a simple reason for this, as the BIS had highlighted: ultra low rates may perversely be driving a greater propensity for consumers to save as  retirement income becomes more uncertain.

What logically followed from this is that inflation would also track rates lower, resulting in a crushing blow to economic orthodoxy where the only weapon central banks had left to spark an economic - read inflationary - recovery was to ease monetary conditions even more in hopes that eventually they would drop low enough to spark the long-awaited recovery.

It never happened, even though amusingly it was all the way back in 2015 that we predicted - correctly in retrospect - just what the monetary endgame is:

fear not: when even "moar" QE and NIRP do not work, and the economists of the ECB admit the "monetary twilight zone" was a disaster, there is one last "tool" they can and will use - helicopters. Because when it comes to printing money, whether in digital reserve format, or physical paper format, there is literally no limit how much can and will be created to achieve what is the endgame of the current monetary dead end: the total destruction of fiat as a store of wealth in order to preserve the global equity tranche while wiping away a few hundred trillion in debt.

Thanks to covid-19, we have now moved beyond merely the "twilight" and are now in the "helicopter" zone.

But what about the relationship between rates and savings, and by extension inflation? After all that is the topic of this post. Well, we can now confirm that our intuition from 2015 that negative rates are not only not inflationary but outright deflationary, and encourage consumers to save even more, was correct all along.

Below we post a chart from the latest Research Investment Committee report by BofA titled "Stagnation, stagflation or elevation", which with just one image blows up everything that is flawed with monetary policy. It shows that while lower rates indeed stimulate spending and lead to lower savings, this effect peaks at around 4% and then goes negative. In fact, the lower yields - and rates - drop below 4% - not to mention to 0% or below - the lower the propensity to spend and the higher the savings rate! 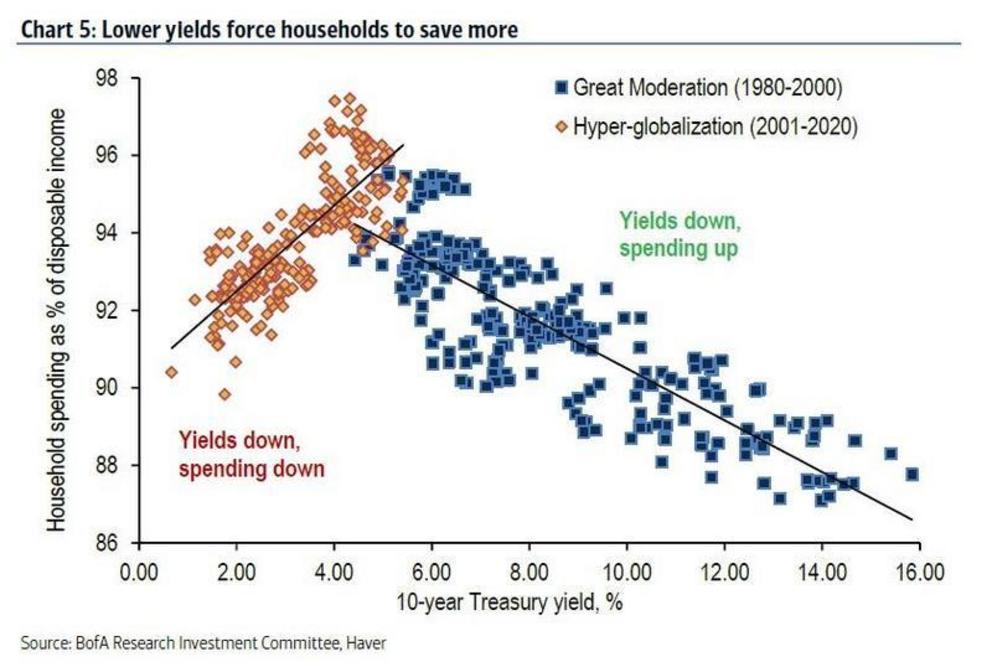 There is another reason why this chart of such epic importance: it confirms what so many have known but were afraid to voice as it ran against decades of flawed economic theory: it demonstrates without a shadow of doubt, that hyper-easy monetary policy is not inflationary but is deflationary. Which is catastrophic for central banks, who publicly state that the only reason they are pursuing ultra easy monetary policy which includes QE and negative rates, is not to goose the market higher (even though by now we all know that's the real reason) but to stimulate inflation.

This is how Bank of America summarizes this stunning observation:

This means that the lower (and more negative) central banks push rates, the lower (not higher) the spending, the higher (not lower) the savings rate, the lower the inflation, the higher the disinflation (or outright deflation), which in turn forces central banks to cut rates even more, to add QE, yield curve control, buy junk bonds, buy ETFs, or pursue any of a host of other monetary policies that are even more devastating to consumer psychology, forcing even more savings, resulting in even more disinflation, causing even more intervention by central banks in what is without doubt the most diabolical feedback loop of modern monetary policy and economics.

Said otherwise, monetary easing is deflationary. Let that sink in.

Meanwhile, as central banks spark even more deflation with their policies, the one place where all those trillions in liquidity they conjure out of thin air ends up in, is what was once known as the "market" and is now, in the words of BofA the "fake market" or as DB calls it "administered markets", leading to ever higher fake asset prices, and ever greater wealth and income inequality, which ultimately tears the fabric of society itself.

In fact, just look at what's happening to America right now: rioting, looting, pillaging, Americans fighting other Americans and while the media is spinning self-serving narratives that frame the bad guy as Trump, or China, or Russia, or this political party, or that, or some social movement, the truth is that the culprit behind the upcoming collapse of the US is just one, the same one that Thomas Jefferson warned the brand new nation about more than two centuries ago:

I believe that banking institutions are more dangerous to our liberties than standing armies. The issuing power of currency shall be taken from the banks and restored to the people, to whom it properly belongs.

If the American people ever allow private banks to control the issue of their currency, first by inflation, then by deflation, the banks and corporations that will grow up around them will deprive the people of all property until their children wake up homeless on the continent their Fathers conquered."

As a reminder, the Fed - as the Bank of England was so kind to remind us - is a private institution. Now if only someone could explain to all those millions of angry Americans that the source of virtually all of society's ills is to be found in the building below (which just happens to house an unknown amount of freshly printed dollar bills), it would be a much-needed start to the reset the US so desperately needs to avoid complete destruction.