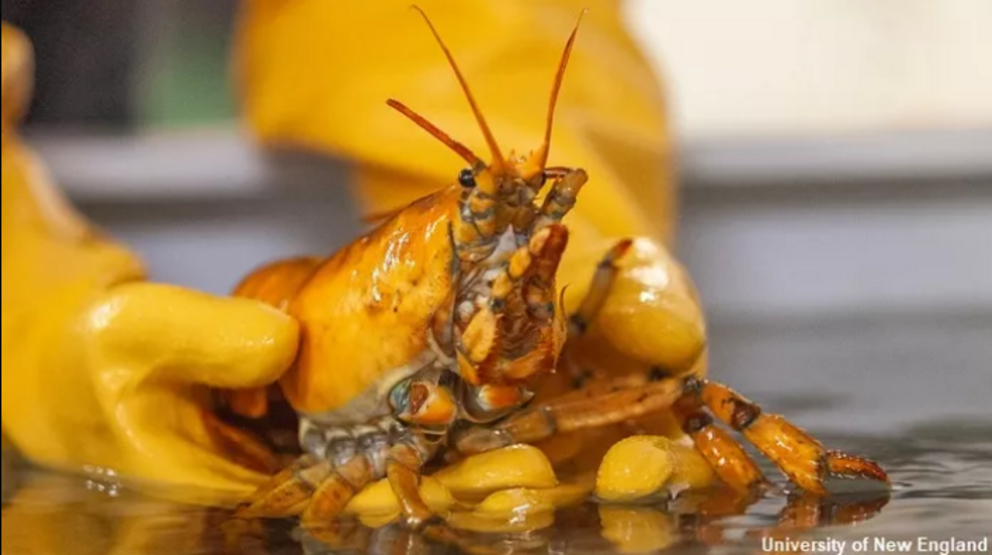 A lobster recently caught off the coast of Maine is raising eyebrows thanks to its striking and incredibly rare yellow coloring. The vivid-looking creature, which has been given the delightful moniker 'Banana,' was reportedly captured by lobsterman Marley Babb as she was working in the waters of Tenant's Harbor last week. Realizing the unique nature of the freshly snagged lobster, she promptly reported the wondrous find to the Maine Department of Marine Research, who put her in touch with scientists at the University of New England's Marine Science Center, who were more than happy to take the remarkable crustacean off her hands.

In announcing their acquisition of the golden creature, Lindsay Forrette of the Marine Science Center saluted Babb's diligence in protecting the animal, noting that she actually "insisted on driving Banana all the way down from Tenant's Harbor to drop her off" at the university after the lobsterman had finished her arduous day's work. The crustacean's coloring is due to a genetic mutation that rendered its body yellow and, according to experts, the odds of finding such a lobster is a staggering one-in-30 million. Said to be "settling in nicely" at the Marine Science Center, Banana will be studied by researchers and, in turn, saved from an uncertain future in the ocean, where its eye-catching color would leave it extremely vulnerable to predators.